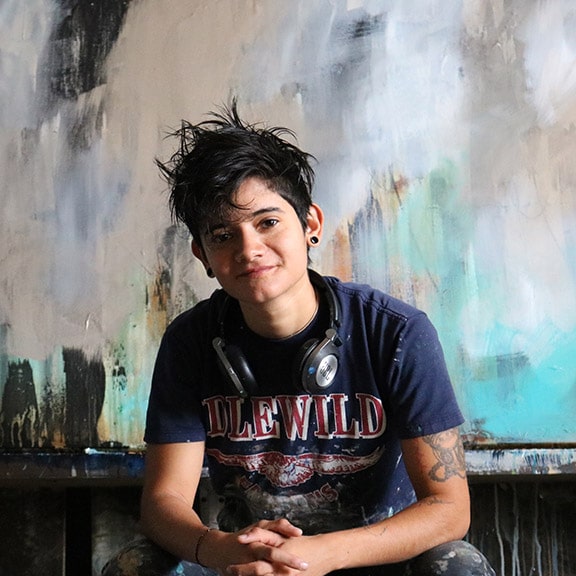 I want to make the viewer feel something. Whether it be something good or bad.

My work starts with a feeling. Those feelings are translated and encrypted by the use of unconventional mediums and an application process of heavy layering that can unfold anywhere from weeks to years. Exploration is usually the goal, with other discoveries found along the way due to my method of painting and image transferring. The paint is the feeling; the feeling is the art which I hope reflects differently upon each viewer. In my work, I celebrate imperfection with the processes of sanding, tearing and smearing. The perception of bad may in fact be good!

Ultimately my creative process uncovers contrast through experimentation with various materials. The morphing of content offered in my art is directly connected with a desire for each work to possess multiple possibilities of meaning. With each new glance at the variety of materials, new meaning may emerge.

Born in Monterrey N.L. Mexico, Stephanie Gonzalez spent a lot of time in the care of her grandparents in Reynosa, Mexico from the ages 9 to 13 as her mother was busy working long shifts. It was through her grandfather that she discovered painting. Every morning Stephanie would sneak into her grandfatherÛªs room while he watched painting instructional videos by painter Bob Ross and started painting landscapes. She began painting almost daily at the age of 14 to escape a hostile environment back at home with her mother and step farther. and later started developing various techniques and experimenting with different mediums. As a child, Gonzalez moved to Reynosa from Georgia at the age of 7 after spending two years there and back to Mexico at the age of 9 and then to the Rio Grande Valley in Texas at age 13. After high school, she moved to Houston, where she currently resides. Stephanie enjoys graphic design work, murals and interior designs and especially creating mixed media abstract works that reflect her emotions. In her work, she uses mixed media such as coffee, wine, aerosol paint, watercolors, acrylics, oil pastels, china ink.

Stephanie received her BFA in Interior Design from the Art Institute of Houston in December 2011 and is currently attending Houston Baptist University to obtain her MFA in painting. She has created works for public collections such as Starwood Hotels (Le Meridien, Saigon), murals for renown designer Chloe Dao’s Lot 8 Boutique (Houston, TX), Skyline Art Services, (Houston, TX) the Make a Wish Foundation, and a variety of other commissions. Gonzalez has also participated in many art happenings in Houston and shown her art at various galleries throughout the South Texas area. She is well versed in many design programs including Photoshop, Illustrator, Indesign, AutoCAD, Revit, & 3D Studios Max. Stephanie currently works as a full time Fine Artist in Houston, TX.

Stephanie seeks to reflect and inspire emotion through her works.