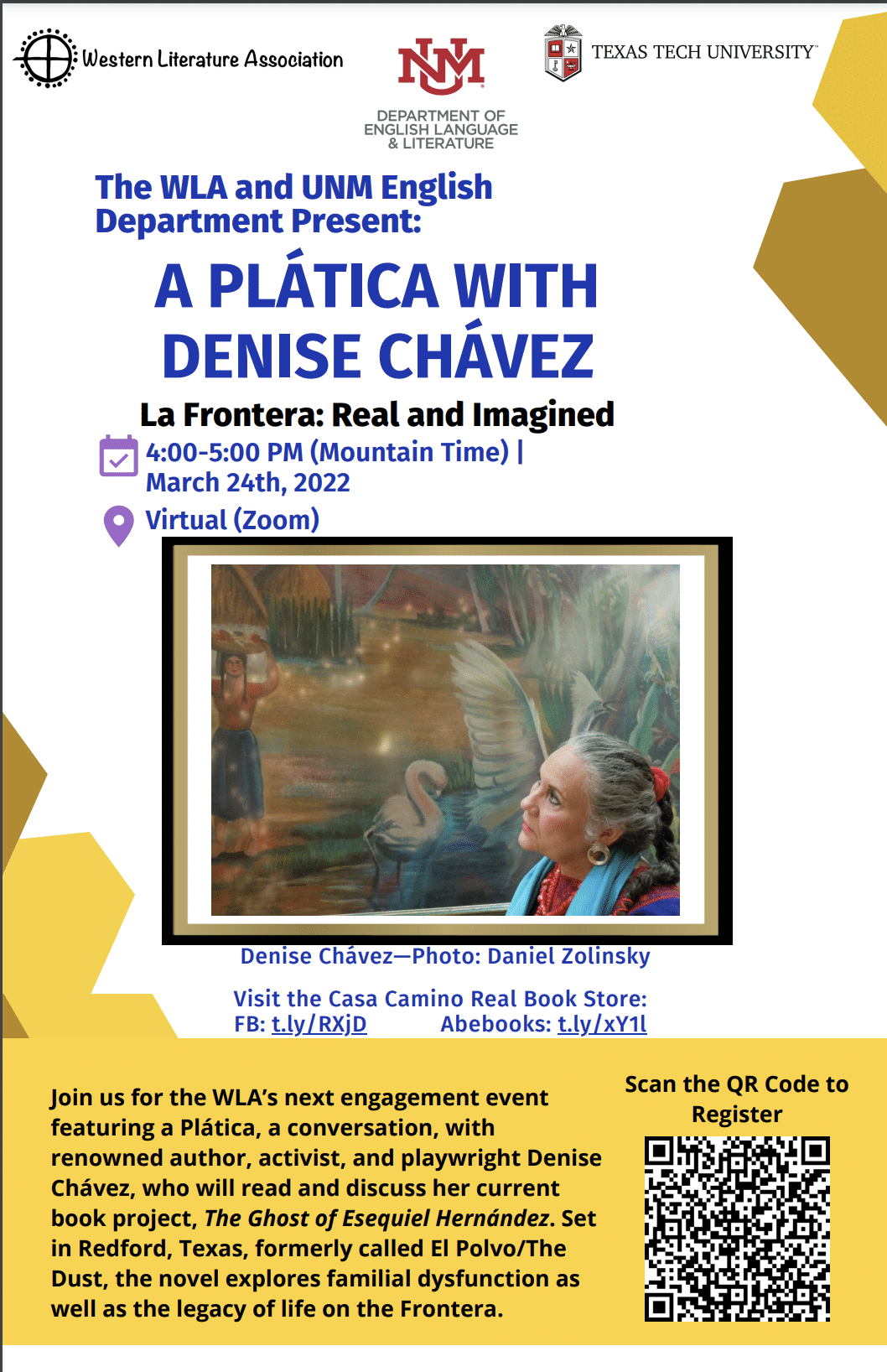 Thursday, March 24 at 4:00 PM (Mountain Time)
Plática, a Conversation with renowned author, activist, playwright and UNM alumna Denise Chávez, an event co-hosted by the UNM English Department and the Western Literature Association
Denise will read and discuss her current book project, The Ghost of Esequiel Hernández, a novel exploring the dark history of the U.S.-México border with its ever- present military presence that has tragically impacted his inhabitants and their way of life. The novel is set in Redford, Texas, formerly called El Polvo/The Dust, where eighteen-year-old goat herder, Esequiel Hernández, was killed by a U.S. Marine in 1997. Chávez’s maternal roots are in this remote and magical corner of Far West Texas. The novel explores familial dysfunction as well as the legacy of life on the Frontera, the liminal space that is the break between these worlds.
As founder and director of Casa Camino Real, a bookstore and gallery located in the historical Mesquite District on the Camino Real in her hometown of Las Cruces, New Mexico Denise believes in the healing power of books to save lives. She is the author of various books including The Last of the Menu Girls, Face of An Angel, A Taco Testimony: Meditations on Family, Food and Culture, and her most recent, The King and Queen of Comezón. Chávez is the recipient of the American Book Award, the Lila Wallace-Reader’s Digest Fellowship, the Hispanic Heritage Award, and the New Mexico Governor’s Award in Literature. Denise holds a BA (NMSU, 1971), MA (Trinity, 1974), and MFA (UNM, 1984), as well as an honorary doctorate from UNM (2004).
Please visit her on Facebook at https://www.facebook.com/Casa-Camino-Real-Book-Store-Art-Gallery-345230548885989
and on Abebooks at: https://www.abebooks.com/casa-camino-real-las…/55655980/sf
Denise also recommends the following movies:
The Ballad of Esequiel Hernández: https://www.pbs.org/pov/watch/ballad/
The Devil’s Swing by Alan Govenar: https://www.docarts.com/devils_swing.html
​
You must register for the event. You can scan the flyer’s QR code or visit: https://forms.office.com/pages/responsepage.aspx…