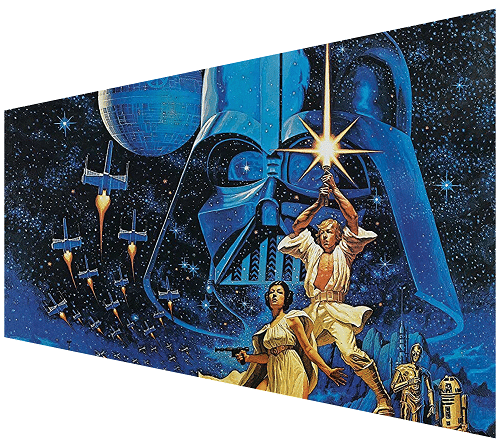 Join Professor Carmelo Esterrich and Professor Bayram Gascot Hernández on Star Wars Day (May the 4th!) at 4 PM EST for un Cafecito con… Carmelo Esterrich: Star Wars Multiverse. Moderated by Centro Outreach and Partnership Manager (and resident Star Wars fan), Rosa Cruz Cordero. This Cafecito con will explore Esterrich’s latest book, Star Wars Multiverse, and how the rich complex story that is Star Wars goes beyond epic space battles between good and evil. Drawing from a full range of Star Wars media, including comics, television, children’s books, and fan films, Professor Esterrich explores how these stories set in a galaxy far far away reflect issues that hit closer to home on such topics as authoritarianism, colonialism, xenophobia, sexuality, and gender norms. Professors Esterrich and Gascot Hernández will explore how being Puerto Rican places one in the socio-political intersection of class, political oppression, empire, colonialism, rebellion, and war and how Star Wars is an ideal mirror for the current turmoil in Puerto Rico. The panelists will also share their experience of teaching Star Wars in the United States and Puerto Rico, respectively and perspectively. This event will be streamed via Zoom and Centro’s Facebook, and will have bilingual translation. We’ll see you there and May the Force be with you!

His research and publication focuses on the cultural and artistic production in Latin America—especially film, literature, visual arts and popular music. His article, “Rock with Punk with Pop with Folklore: Transformations and Renewal in Aterciopelados and Café Tacuba,” was selected to be reprinted in Stephen Duncombe’s book White Riot: Punk Rock and the Politics of Race. His book Concrete and Countryside: The Urban and the Rural in 1950s Puerto Rican Culture was published by the University of Pittsburgh Press in 2018. The book deals the complex (and often contradictory) representations of rural and urban spaces, subjects and practices in the context of the rapid modernization of the island during the midcentury. He is currently writing on documentary filmmaking by Latin American women, and is beginning a project on contemporary Brazilian cinema. Carmelo Esterrich is a regular member of the selecting committee for the Chicago Latino Film Festival. He earned his PhD in Spanish from the University of Wisconsin, Madison, focusing on Latin American literatures and cultures. Dr. Esterrich also holds a BA in Film Studies (Honors) from The Pennsylvania State University.

Professor Bayram J. Gascot Hernández currently Instructor of Philosophy and Ethics at the University of Puerto Rico in Aguadilla. Originally from the municipality of Bayamón in Puerto Rico, he majored in Philosophy at the Universidad Central de Bayamón, and got an M.A. in Philosophy from the University of Puerto Rico, Río Piedras Campus. He´s also set to graduate in June from a second M.A., this time on Creative Writing, from the University of the Sacred Heart. He has published a small number of short stories under the name ¨Josef Gascot¨. His academic research interests include the radical critique of Liberalism and Capitalism and the origins of Philosophy, with an emphasis on the relationship between mythology, religion and philosophic/scientific discourse. He has taught Ethics, Introduction to Philosophy, and Modern and Medieval Philosophy at both the Universidad Central de Bayamón and UPR in Aguadilla. He is currently teaching a course on Star Wars, titled ¨Star Wars and the Myth of Modernity¨, which explores the question of whether Star Wars is a myth and what is it a myth of; while also tackling the quasi religious elements modern cinema and fandoms can take. He is author of a blog on Star Wars called ¨How the Force Works¨, which tries to construe an interpretation of the main saga.

Rosa Cruz Cordero is CENTRO’s outreach and partnership manager. She is charged with developing outreach initiatives aimed at engaging students, scholars, community and other organizations. Rosa also is responsible for nurturing our partnerships. Rosa is a certified nonprofit professional with vast experience managing college access programs at CUNY, and is a graduate of the Baruch College School of Public and International Affairs.