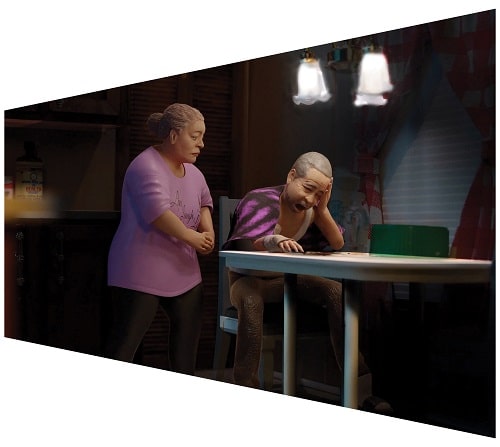 Join us on Thursday, April 28th, 2022 at 4 PM EST for a Cafecito con William D. Caballero: Big Stories with Small Figures. We’ll be joined by filmmaker William D. Caballero and Dr. Jillian M. Báez to discuss William’s 2017 short film Chilly & Milly, which explores the director’s own experiences with his chronically ill father and his mother’s role as his eternal caretaker. Also discussed will be Victor & Isolina, which focuses on two elderly Latinos embarking on a resonating “he said/she said” account of the events that led them to live separately after more than 50 quirky and stressful years together. Tune in for a screening of the film as well as a discussion between William and Jillian. Be sure to bring your burning questions to the event, as we’ll turn it over to the audience for a Q&A at the end!

Caballero’s directorial debut came in the form of a feature length autobiographical documentary entitled AMERICAN DREAMS DEFERRED, which focused on the diverse health, financial, and social difficulties facing his Puerto Rican-American family. This cinema-verité film was selected for the NALIP (National Association of Latino Independent Producers) Latino Producers Academy, eventually receiving the first annual HBO-NALIP Documentary grant. Five years after its conception, it went on to have a national television premiere on PBS in December, 2012. Post-premiere, he has screened the documentary at over 40 American universities.

Jillian Báez is an associate professor in the Africana and Puerto Rican/Latino Studies Department at Hunter College, City University of New York. She is also an affiliated faculty member at the CUNY Mexican Studies Institute and on the doctoral faculty in Women’s and Gender Studies at the CUNY Graduate Center. Her research expertise lies in Latina/o/x media and popular culture, transnational feminisms, and issues of belonging and citizenship. She is the author of In Search of Belonging: Latinas, Media and Citizenship (University of Illinois Press, 2018), recipient of the 2019 Bonnie Ritter Award for Outstanding Feminist Book at the National Communication Association. Dr. Báez’s research has also been published in numerous peer-reviewed journals including Critical Studies in Media Communication; Communication, Culture & Critique; Women’s Studies Quarterly; Latino Studies; Centro: Journal of the Center for Puerto Rican Studies, and Chicana/Latina Studies.