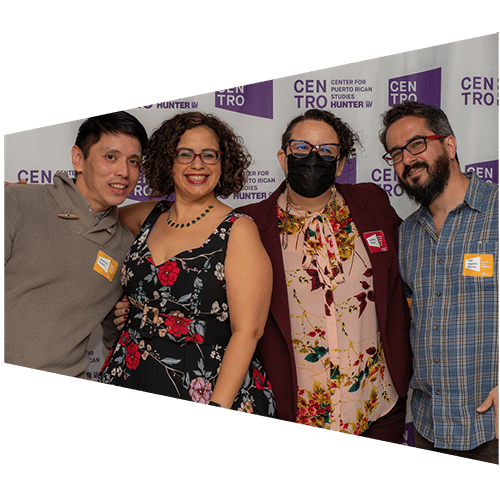 On Wednesday, December 15th at 2 PM EST, we will be hosting a very special Data Hub Coffee Hour, where our data hub team will highlight their Fall 2021 research work and the research associates will present their research plans they will undertake during their Centro residency. Dr. Matthew Nicdao, Dr. José A. Laguarta Ramírez, Dr. Elizabeth Taveras, and Dr.Celiany Rivera Veláquez will each give a 10 minute presentation of their research plans.

Dr. Matthew Nicdao recently received his PhD in the Spanish and Portuguese Department at NYU. His research centers on race and nation formation(s) as expressed in the literary and visual cultures of nineteenth-century Spanish empire, particularly in Puerto Rico and the Philippines. His research interests include anti-colonial thought and praxis, critical ethnic studies, comparative racializations, and literary and visual cultural production. During his residency at CENTRO, he will be preparing his first manuscript—tentatively titled, Dissensus at the Edges of Empire—as well as working on two projects: one which examines the life and works of nineteenth-century Afro-Puerto Rican writer Eleuterio Derkes (including a translation of one his shorter texts) and another which analyzes artist Pepón Osorio’s 1991 installation piece The Wake (El Velorio).

Dr. Celiany Rivera holds a doctorate in Communications & Media from the University of Illinois in Urbana­-Champaign. They have served as the Director of the NYU LGBTQ Center and as an Adjunct Faculty at the NYU Silver School of Social Work. Since 2016, they have served as faculty at Universidad de Sagrado Corazón and of Universidad de Puerto Rico. They are the founder of Circuito Queer an non-for-profit organization that designs educational and collaboration opportunities for feminist and LGBTTQIA+ movement leaders in Puerto Rico and the Caribbean. Their research contributions can be found in comissioned reports like Technologies for Liberation: Towards Abolitionist Futures (2020) and anthologies like Blacktino Queer Performance (2016), Feminist Erasures (2015) and Rita Indiana: Archivos (2017). Throughout their career, they have combined written and visual knowledge production to train and consult, as well as screen and present, their work in national and international settings.

José A. Laguarta Ramírez was born in San Juan and has a Ph.D. in Political Science from The Graduate Center, CUNY. His current research focuses on the moral economies of colonial capitalism in Puerto Rico. It explores how different ways of speaking, thinking, and feeling on diverse social and political “ills” and their appropriate “remedies” (both historical and contemporary) have emerged and in turn shaped different responses by differently positioned social actors.

Dr. Taveras Rivera is a multifaceted educator (spanning from K-12 to adults), consultant, and researcher who received her Ed. D. from Columbia University. She focuses on overall school development through curriculum expansion, student advocacy, inclusion, and multilingual learners. She has experience in issues connected to cultural pedagogies, special education, home-school partnerships, and more. She currently works as a research associate who is exploring the work lives of Puerto Rican educators and the role of culture in their retention. She is also engaged in documenting Puerto Rican pioneers in bilingual education and Puerto Rican studies. I am currently a Research Associate focusing on the work-lives of Puerto Rican teachers and the role of culture in their retention. I am also conducting research on anti-bullying training among middle school teachers working with urban students. Concurrently, I am conducting a series of interviews with PR pioneers in the area of Bilingual Education and PR Studies.