Directed by Laurie Coyle
Not Rated, 58 minutes, DVD
In English and Spanish with English subtitles

In the docu-detective Adios Amor, the discovery of lost photographs sparks the search for a hero that history forgot — Maria Moreno, a migrant mother who sacrificed everything but her twelve kids in the passionate pursuit of justice for farmworkers.

Years before Cesar Chavez and Dolores Huerta launched the United Farm Workers, Maria picked up the only weapon she had — her voice — and became an outspoken leader in an era when women were relegated to the background. The first farm worker woman in America to be hired as a union organizer, Maria’s story was silenced and her legacy buried — until now.

This is a free but ticketed event. Limit one ticket per person. Tickets will only be available for pick-up one hour prior to the performance. To guarantee your reservation please pick-up your Will Call tickets at least 15 minutes prior to the performance. In the event of a sell out, unclaimed Will Call tickets will be used to seat patrons waiting on standby.

Co-sponsored by the Institute for Latino Studies and the John & Margaret Brogan Endowment for Excellence in Documentary Film. 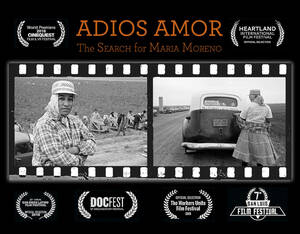