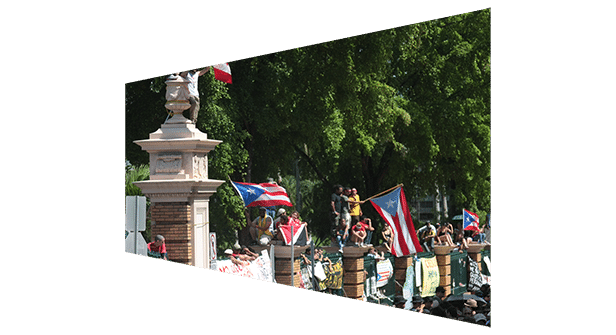 Join us this Wednesday January 26 for part III of Acción UPR! After discussing some of the most urgent problems affecting the UPR in previous events ( /events-news/events/town-hall-event-acci%C3%B3n-upr), in this second follow-up meeting we will convene again in break-out rooms to give continuity to specific actions that the diaspora and alumni of the University of Puerto Rico can to defend public education in Puerto Rico! Come ready to put your talents and commitment into action to ensure access to public higher education in Puerto Rico. Facilitators will include Dr. Greetchen Díaz Muñoz, Dr. Isar Godreau, Dr. Lida Orta- Anés and Dr. Jorge Colón.

Dr. Greetchen Díaz Muñoz has created and led various high impact projects in the areas of research, education, communication and public policy. She has had the opportunity to teach at the K-12 school and collegiate levels, developing lessons and curricula. In addition, she has trained K-12 educators and other scientists, and has mentored a multitude of students. Dr. Díaz Muñoz has served in various leadership and fiduciary roles that has allowed her to develop diverse skills, especially in the areas of project management and implementation, as well as strategic planning.

Dr. Isar Godreau is a researcher at the Institute for Interdisciplinary Research at the University of Puerto Rico at Cayey where she directs various institution-wide level research initiatives and her own research projects. Her publications explore issues of “race”, racism and identity in Puerto Rico and the Caribbean. She has published on hair, racial terminology, the folklorization of blackness, census racial categories, the effects of racism in Puerto Rican schools, and more recently on the status of higher education in the aftermath of Hurricane María. She is the author of Arrancando mitos de raíz: guía para la enseñanza antirracista de la herencia africana en Puerto Rico (2013) and Scripts of Blackness: Race, Cultural Nationalism and US Colonialism in Puerto Rico (2015 by University of Illinois Press and winner of the Frank Bonilla best book award). Dr. Isar Godreau studied at the University of Puerto Rico, Río Piedras and later obtained her Ph.D in cultural anthropology from the University of California Santa Cruz (1999).

Dr. Jorge L. Colón is a Professor of Inorganic Chemistry at the Río Piedras campus of the University of Puerto Rico. He is PI of the NSF-Partnership for Research and Education in Materials’ Center for Interfacial Electrochemistry for Energy Materials (CIE2M), a collaboration between the University of Puerto Rico, the Ana G. Méndez University, Cornell University, and Cornell’s synchrotron facility CHESS. He is an American Association for the Advancement of Science Fellow, Fellow of the Royal Society of Chemistry (UK), an American Chemical Society (ACS) Fellow, member of the ACS International Affairs Committee and of the International Union of Pure and Applied Chemistry, Division II (Inorganic Chemistry). He received the Igaravídez Award and the Chemical Education Award of the Puerto Rico Section of the ACS and the Osvaldo Ramírez Torres Award of the Colegio de Químicos de Puerto Rico. He is coauthor of Guías para el Desarrollo Sustentable de Vieques (2002), El proyecto de explotación minera en Puerto Rico 1962 a 1968: Nacimiento de la conciencia ambiental (2014) and coeditor of Tailored Organic Inorganic Materials (2015). His research interests are in nanomaterials with applications in solar energy, electrocatalysis, biosensors, and anticancer drug delivery.

Dr. Lida Orta Anés is a Professor in the Graduate School of Public Health of the Medical Sciences Campus, University of Puerto Rico. She graduated from the University of Michigan, USA, with a Ph.D. in Sociotechnological Planning and Engineering Management with a major in Ergonomics. Her areas of research have been Participatory Ergonomics, Occupational Health, Anthropometry, etiology and psychosocial factors of Musculoskeletal Injuries, and aspects to be considered when returning to work after injuries. Dra. Orta Anés have been a member of national and international work teams and advisory boards for the Occupational Health and Safety Administration (OSHA), National Institute of Safety and Health (NIOSH), American National Standards Institute (ANSI), and the International Labour Organization (ILO). In 2014-2015, she spent a sabbatical leave as a visiting researcher at the Research Center for Occupational Health of the Universitat Pompeu Fabra (CISAL, by its initials in Spanish)