Line in the Land: A Haitian Odyssey 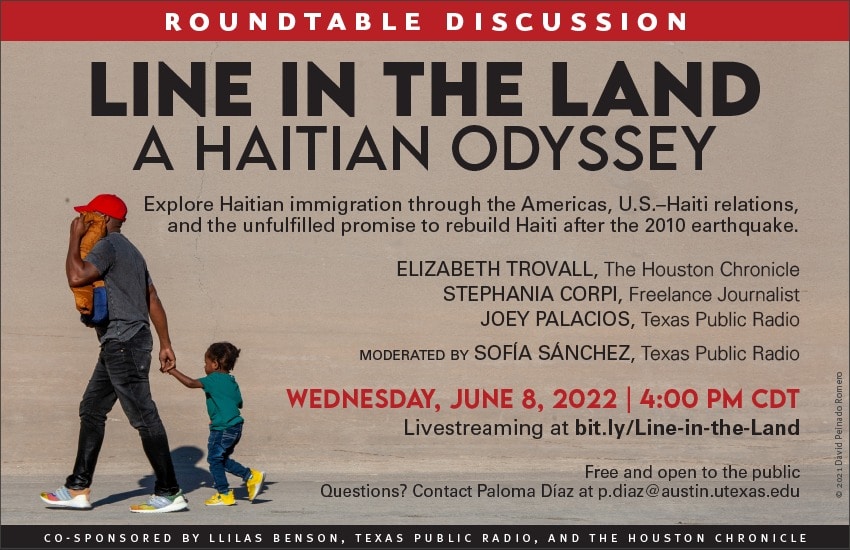 Line in the Land: A Haitian Odyssey
June 8 | 4:00pm (CDT)
Livestream on this page.
Join us for a roundtable discussion with the reporters and producer of the five-episode podcast series “Line in the Land,” produced in English and Spanish by Texas Public Radio and the Houston Chronicle.
This podcast focuses on an immigration journey like no other – one that takes us thousands of miles from the rubble of the 2010 Haitian earthquake to South America through one of the most dangerous jungles in the world to Central America, Mexico and Texas.
When 16,000 Haitians arrived in Del Rio, Texas in September 2021, the humanitarian crisis made international headlines. But the unlikely spectacle at the Texas-Mexico border was just a glimpse of an immigration journey of more than 10,000 miles, through South America, all the way to Del Rio and the Houston suburbs.
For many, Del Rio was the end of a long journey. For others, it was the start of a new chapter. In this podcast, we unpack what drove this exodus and explore the structural, legal, cultural, and societal adversity this group has faced. We’ll also dive into the historical context about Haitian migration to the U.S. and the complicated relationship between these two countries – which happen to be the richest and poorest in the Americas.
For the first season of Line in the Land, Texas Public Radio and the Houston Chronicle explore the human story behind this Haitian odyssey, along with the seismic forces at play – immigration policies, U.S.-Haiti relations and the unfulfilled promise to rebuild Haiti.