Please join the Creative Writing Program for a zoom event in partnership with Letras Latinas, the literary initiative at the Institute for Latino Studies. On the occasion of Hispanic Heritage Month, we are celebrating Ballad of a Happy Immigrant, the English-language debut by Leo Boix, who will also be in conversation with Yvette Siegert on the state of British Latinx poetry. The reading will feature special guests including Francisco Aragón, Antonio López, Janel Pineda, Alexandra Lytton Regalado, and Yvette Siegert.

This reading will be taking place via zoom on Wednesday, September 29th at 7:00 pm EST.

Registration for the event here.

Leo Boix is a bilingual Latinx poet born in Argentina who lives and works in the UK. Boix has been included in many anthologies, such as Ten: Poets of the New Generation (Bloodaxe), The Best New British and Irish Poets Anthology 2019-2020 (Black Spring Press), Islands Are But Mountains: Contemporary Poetry from Great Britain (Platypus Press) and Un Nuevo Sol: British Latinx Writers(flipped eye). His poems have appeared in POETRY, PN Review, The Poetry Review, Modern Poetry in Translation, The Manchester Review, The White Review, Ambit, The Morning Star, The Rialto, Magma Poetry, Prism International and elsewhere. He is a fellow of The Complete Works program, co-director of Invisible Presence, an Arts Council national scheme to nurture new voices of Latinx writers in the UK, and an advisory board member of The Poetry Translation Centre. Boix was the recipient of the Bart Wolffe Poetry Prize Award 2018 and the Keats-Shelley Prize 2019. ‘Ballad of a Happy Immigrant’ (Chatto & Windus, 2021) is his debut English collection and it was awarded the Poetry Book Society PBS Wild Card Choice. It was also selected as one of the five best poetry collections by The Guardian (August).

Francisco Aragón is the son of Nicaraguan immigrants. His books include, After Rubén (Red Hen Press, 2020), Glow of Our Sweat (Scapegoat Press, 2010), and Puerta de Sol (Bilingual Press, 2005).  He’s also the editor of, The Wind Shifts: New Latino Poetry (University of Arizona Press, 2007). His work has appeared in over twenty anthologies, as well as various literary journals, both print and online. A native of San Francisco, CA, he is on the faculty of the University of Notre Dame’s Institute for Latino Studies (ILS), where he teaches courses in Latinx poetry and creative writing. He directs the ILS’ literary initiative, Letras Latinas. A finalist for Split This Rock’s Freedom Plow Award for poetry and activism, he has read his work widely, including at the Dodge Poetry Festival and the Split This Rock Poetry Festival. For more information, visit: http://franciscoaragon.net

Antonio López is a poetician working at the intersection of poetry, politics and social change. He has received literary scholarships to attend the Community of Writers at Squaw Valley, Tin House, the Vermont Studio Center, and Bread Loaf. He is a proud member of the Macondo Writers Workshop and a CantoMundo Fellow. He holds degrees from Duke University, Rutgers-Newark, and the University of Oxford. He is pursuing a PhD in Modern Thought and Literature at Stanford University. His debut poetry collection, Gentefication, was selected by Gregory Pardlo as the winner of the 2019 Levis Prize in Poetry. Antonio is currently fighting gentrification in his hometown as the newest and youngest councilmember for the City of East Palo Alto. www.barrioscribe.com

Janel Pineda is a Los-Angeles born Salvadoran poet, educator, and the author of Lineage of Rain (Haymarket Books, 2021). She has performed her poetry internationally in both English and Spanish, and been published in various anthologies. Since her involvement with the 2018 Radical Roots Delegation, Pineda is also a member of the Committee in Solidarity with the People of El Salvador (CISPES). As a Marshall Scholar, Janel holds an MA in Creative Writing and Education from Goldsmiths, University of London and is currently pursing an MPhil in Latin American Studies at the University of Cambridge.

Alexandra Lytton Regalado is the author of Matria, winner of the St. Lawrence Book Award (Black Lawrence Press, 2017). She is a CantoMundo fellow, winner of the Coniston Prize, and her work has appeared in The Best American Poetry, The Academy of American Poets, Narrative, Gulf Coast, and Creative Nonfiction among others. Co-founder of Kalina press, Alexandra is author, editor, and/or translator of more than fifteen Central American-themed books. www.alexandralyttonregalado.com

Yvette Siegert is a poet, editor, and translator. Born in California, to parents from El Salvador and Colombia, she grew up between the US and Mexico and is now settled in the UK. She has received support and mentorship from CantoMundo, Macondo, Bread Loaf, Ledbury Critics, and the National Endowment for the Arts, and her translation of Alejandra Pizarnik’s late work, Extracting the Stone of Madness: Poems 1962–1972 (New Directions), won the Best Translated Book Award. She is currently writing her debut collection, with funding from Arts Council England, while completing a doctorate in Colombian-Caribbean intellectual history at the University of Oxford. 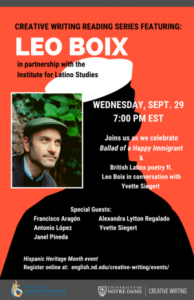